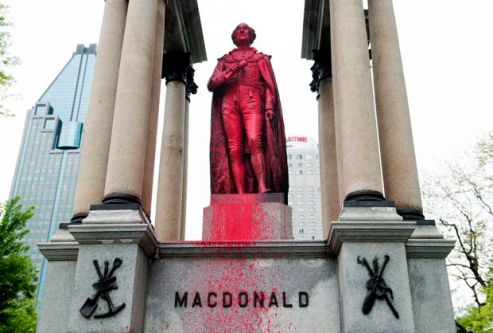 I haven’t written for a while. I was navigating through some health issues and that took quite a bit of time but it gave me an opportunity to stop and watch. One should always take these rare opportunities as they arise and, if at all possible, savour them and take plenty of notes.

Across Canada, I have seen things that cause both alarm and confidence in this Western Separatist. In Victoria a statue of Sir John A. Macdonald was taken down over the shame he represents to the more sensitive amongst us. At other places statues of Sir John have been drenched in red paint. Our government has done nothing to address this, at least nothing worth mentioning.

The tanker ban is still in effect on the BC coast and efforts are in steady progression to ensure the Western economy suffers as much as possible. To say Ottawa has deaf ears to the sufferings of Western Canadians is an understatement. We must be punished as much as possible for not supporting the Trudeau Liberals.

Justin Trudeau and his Liberals still hold sway in eastern Canada and the Maritimes. If polls are to be believed he will, at the very least, have a diminished majority government in the next election.  The West will in all probability give him the same support as in 2015, prompting a new round of punishments. At time of writing Andrew Scheer has failed to energize his presence on the national stage and although he appears capable, today’s voters are more responsive to glamour socks and special interest group parades than good old fashion ability. Add to the mix Maxime Bernier’s PPC and we now have a scenario where Trudeau enjoys votes from the east, a split right and changes to the Canada Elections Act which will permit anyone, citizen or not, to vote in our Federal Elections virtually unquestioned. Now we know why the Canadian border was effectively dissolved by Trudeau and his support for United Nations open borders policies. He is building an implicit “Liberal forever” state. And what’s even more alarming is the media’s submissive fawning of Trudeau and the Liberal plan.

It’s a progressive’s dream come true and no one can stop it.

So what does this mean to us? We are fighting for independence from a rapidly decaying country called Canada. And we are hoping to do it as quickly as we can. But as it may appear that one of the main arguments against independence, the historical development of Canada, also known as “it’s always been this way” or “my Canada has always included the west”, simply doesn’t stand up to scrutiny nor is it a defensible argument.

In recent years, Canada has been marching lockstep behind the calamitous divisions going on in the United States. It seems that Canada, being the junior partner in what is North America, is repeating US happenings at a slower pace. Our pace may be slower but the results are the same. We are now at the stage where we are actively rewriting or discarding Canadian history. Once highly regarded politicians including the father of our country are now regarded as blood thirsty evil doers. Even the Prime Ministers on our currency are being replaced with more “inclusive” figures that while deserving of recognition in their own right, are not of a real national standing. More and more of what makes up a country, national pride, history, traditions, patriotism and a sense of community are being replaced with shame of our past, constant apologies based on applying today’s standards to yesterday’s events, ignorance of the importance of borders, catering to minorities and special interests over the well being of the majority, and a media that finds fault in anything that doesn’t affirm the accepted progressive world view. Our schools are no longer centres of learning and innovation; they have become indoctrination centres spreading hatred for anything not conforming to an ideology that for many decades Canadians stood against. Now anyone not following a “utopian” vision is denigrated and slandered. Many people have been ruined for not thinking correctly. Shades of 1984!

Soon…sooner than we think, Western Canada will have enough discontent and malaise to take the leap to independence, at least I sincerely hope so. But one thing is clear, the divisive state of Canada and the continued assault on the West’s economy and citizens cannot continue to a good end for Canada. At some point it will break.

But what about Canada and how the West is a valued part of Canada? At the rate Canada is committing hara-kiri what can the future hold? Canada is not even willing to defend its own history and is espousing the globalist view over national patriotism. This is a trait not generally shared by Westerners who are fiercely proud of their lands and the blood, sweat and tears that got it where it is. Canada has nothing to lose since it doesn’t even care about itself.

But we have everything to gain.

One thought on “What does Canada Have to Lose?”

This site uses Akismet to reduce spam. Learn how your comment data is processed.