On my blog I try to stay as factual as possible, tossing in some history to serve as the context for what might otherwise be not much better than dry toast.

So in this instalment, let’s get a bit more visceral. Let’s talk about what one feels when one looks at independence from Canada.

First, the usual canard that we are miffed and whine about separation because we lost Stephen Harper and the Conservatives.

This is tossed about as validation from the east as to why Westerners are upset. “Oh, they just PO’d because they lost the election.”

Let me tell you something that may come as a shock. Harper and the Conservatives were liberals. In fact, the Conservatives have doubled down at being liberals. One just has to take five minutes to look at the positions of the Conservative Leadership hopefuls and the Ontario PC leadership’s policies to see where we’re at. The status quo is strong and healthy, Canada will continue to go in one direction and one direction only, the difference between left and right in Canada is not much more than the speed at which we go into decline.

Harper was elected in 2006 only as a result of the Sponsorship Scandal. That’s it, voila! And from the moment he took power to his defeat in 2015, the Canadian left, through the media and arguably society as a whole, applied pressure to make sure he headed in the desired direction. In short, his was a caretaker government until the Liberals could be brought back to power. If a scandal wasn’t brewing, the media created one. It was incessant. The next generation of Conservatives know that to be electable they must be Liberals. So what does this mean to secessionists? It means that the status quo cannot and will not be changed…ever.

“The West wants in” never had a chance. It was simply an illusion. And then, the second instalment of Trudeauism…

Eastern Canada has given him a huge majority and he is still popular with high media support despite having wasted 30 billion, lying to Canadians, helping to bring Canada into the Caliphate and now taking steps to make “Islamophobia” a prosecutable offence. This can only mean one thing, Eastern Canada actually WANTS this. His reaction to Alberta fires and Western unemployment, his lukewarm support for pipelines, his commitments to foreign countries and the UN speaks volumes of a man who knows what side his bread is buttered and it isn’t the western side.

So fine, have at it. But the West has had enough; we’ve been milked by eastern Canada and the Laurentian Elites for over 100 years. Now they tax us without fair representation and go out of their way to kill our resource industries in an effort to make Saudis and Americans rich. Ottawa allows foreign groups to protest and sabotage our efforts with impunity.  Westerners have endured this for over a century and when we dared complain we were (and still are) treated as traitors, bumpkins void of original thought, red necks, deniers, and more visceral contempt. 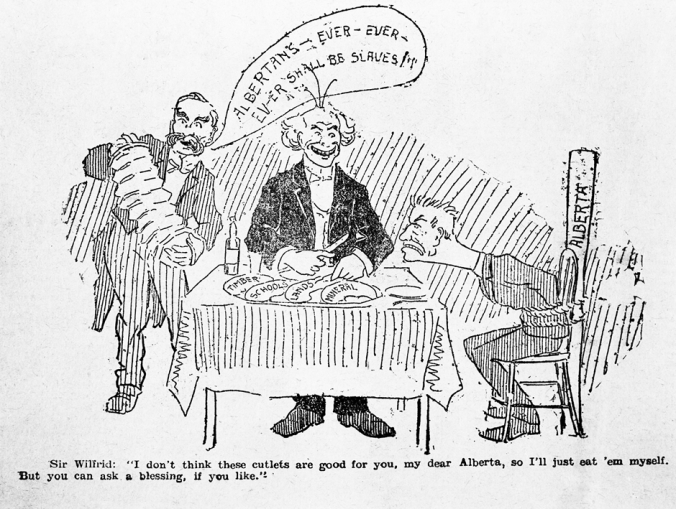 Nothing much has changed for the West since Laurier.

How dare you complain!! Send money and shut up! We in the east, in Ottawa, in the Liberal Party, will tell you what to think and feel and we have the votes, the seats, the media and chosen immigrants on our side so zip it West, your kind is not wanted. We’re far too sophisticated and…elite. And as a sideline, Westerners are treated to Ottawa’s largess towards Quebec. Quebec coughs and Ottawa gives them a case of Kleenex. The West burns and we’re told we could have it worse.

How does that make us feel? Do you have access to 7 dollar a day child care? What are we to think?

I’ll tell you what it makes me think. The Polite Separatist wonders why there aren’t legions clamouring to be free of the demands of Eastern Canada. It really is a no brainer. Put yourself in this situation. You are living in a big house with your whole family. You are expected to provide for everyone else, money, daycare, transportation and heating fuel, food, and much else. You receive relatively nothing in return. You can show up at family meetings but your vote is worthless in decision making and you’ll never have an opportunity to run things. Every time you comment you are told to be quiet and get to work providing.

The West has been brainwashed into thinking Canada is one big happy family. But closer examination tells a very different story. We have a choice; we’ve always had a choice. We can stay in the game with the hopes that someday the east will come to think of us as equals in confederation as we have hoped for better than a century. We can break free and build a country of our own where we make the rules, we decide the future, we govern ourselves, we develop our culture and traditions, where we keep the fruits of our labours and create our own destiny for ourselves and our descendants.

There is, of course, the third choice. This is where we just shut up and live our lives content with whatever scraps we are allowed to keep and let others make our future.

So, how do you feel?

This site uses Akismet to reduce spam. Learn how your comment data is processed.